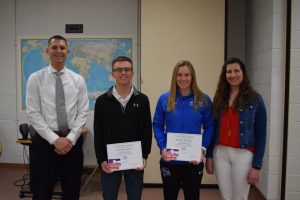 Both Hausserman and Gregory are not only successful in athletics but in the classrooom as well, and serve as great role models for our younger athletes.  Congratulations to both of them for being recognized as the Independent Bank male and female student-athletes of the month for March.

No Events This Week

Events are added by athletic staff.
View All Events